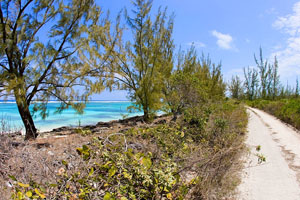 island in the Turks & Caicos chain, Middle Caicos has an area of 48 square miles. However, Middle Caicos is also the least populated island with less than 300 residents. It is a very lush island, suitable for agriculture ranging from medicinal herbs to majestic fruit trees. Middle’s form of agriculture is a cultural feast to behold:  Cassava, okra and guava, tamarinds, sapodillas and sugar apples, to name just a few. However, the cornerstone of their crops is corn. Home grown and home ground, they use the pearly hearts to make their fabulous grits.

The three communities on Middle Caicos are Conch Bar, Lorimers and Bambarra. The settlement of Bambarra was established on the north shore of  Middle Caicos in 1842 by survivors of the shipwreck of the Gambia, a Spanish slaver bound for Cuba. “Bambarra” refers to the Bamberra people who lived on the shores of the Niger River in West Africa. 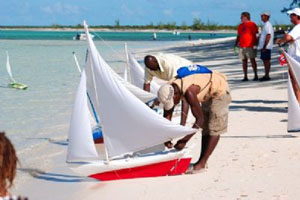 Middle Caicos is known for its bonefishing flats in the calm backwaters between the islands. Fishing trips, either deep sea, reef fishing or bonefishing, can be arranged with native guides based from the Middle Caicos Coop. It is said that the most flavorful seafood comes from the deep waters surrounding Middle Caicos.

Kayaks are available for rent as well as pre-arranged eco-tours through the mangroves that team with creatures of both land and sea. Big Blue Unlimited or Caicu Naniki offers Middle Caicos Eco adventures, kayaking and kayak rentals, mountain biking, and nature hikes. 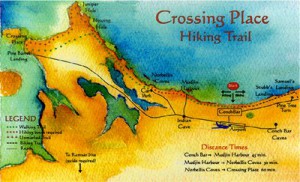 The Middle Caicos Crossing Place Trail, a magnificent coastal trail, has shared its treasures with many through the years by providing a means of livelihood and communication to the islands in between. The old coastal path has now been reopened from Conch Bar to a site along the western shores of Middle, known as Crossing Place, where settlers used to cross-over to North Caicos. A haven for those that love to hike, the 5 mile trail leads along coastal headlands, down beaches and through inland bush.

The foliage on Middle Caicos may catch your eye. “Old Man Cactus” is easily recognized because it stands much taller than plants around it and has a fuzzy white “beard” on top. There is also “Love Weed,” which, legend insists, will predict the outcome of a relationship.

Middle Caicos houses the largest above ground caves in all of the Bahamas and the Turks & Caicos. The caves of Conch Bar were formed by an erosion of limestone. Tours through the caves with local guides can be arranged by contacting Middle Caicos Coop (649-941-7639). If you aren’t spending the night, be sure to call for day excursions to Middle Caicos and the caves during your visit to Turks and Caicos Islands. For more on the Indian Caves click here.

Evidence of Lucayan sites on Middle date back to the early 1400’s. A very important Lucayan settlement was excavated in 1978 on Middle Caicos. Several archeological expeditions have unearthed fossils and facts that lead to the belief that this island was once an epicenter for these ancient Indian tribes.

Following is an excerpt from
Turks Islands Landfall: A History of the Turks & Caicos Islands by H.E. Sadler:

A great deal of evidence has been unearthed to prove that the Lucayans inhabited many of the caves with which the Caicos Islands are abound. It is now generally accepted that these caves were used primarily as places of worship and secondarily as shelters during hurricanes. It was not until the persecution by the Spaniards commenced, after the arrival of Columbus, that the Lucayans began to employ them as permanent abodes. Frequently the mouths of these caves are very hard to find, owing to the dense undergrowth, consequently they would have made ideal places of refuge. A considerable number of implements were found in the Caicos Islands, which are typical of the Lucayan Stone Age.

Near Conch Bar, on the northern coast of Middle Caicos, are the best-known and largest caves in the entire Bahamian chain of islands, the “Village Caves”. These caves have several mouths. When they were worked for guano manure in the 1880s clear evidence of Lucayan habitation was unearthed. The artifacts included two wooden stools and some crude bedsteads made of forked sticks and boughs. The Conch Bar Caves are of great beauty, easy to enter and must have been excellent shelters and dwellings, as it is no rare occurrence to find small fresh water lakes in them.

There is yet another cave close by called the Orange Tree Cave. Also in the neighborhood of Conch Bar is a hill called Dead Man’s Skull Bluff, and on the east of this is another clearing of Taino origin. There are also two caves within a mile of Lorimers, Dark Night Well Cave and Banana Tree Cave, and in the latter was found and entire Lucayan bowl. The location of the entrance of these caves, in many cases, shows that the Tainos must have had ladders, probably the South American Indian kind, consisting of a trunk with transverse notches for steps, which is so common in the coastal regions of the lower Orinoco river.

About four miles southwest of the Lorimers settlement, on the salina, can be found a large number of Lucayan mounds. These mounds average three feet wide and about twelve feet long, and are built of pieces of coral rock. As a rule, the mounds are arranged in a crescent, with not more than six mounds in a group. In this area a considerable amount pottery was found, one a stone knife of dark green jadeite with a cutting edge. In addition to these mounds on the salina flats are two hills, about two miles north of the Lorimers settlement, called Gamble Hill and Indian Hill. There are some eight or ten mounds on Gamble Hill and two in Indian Hill.

Things to do on Middle Caicos