Salt Cay is a tranquil and charming island offering complete relaxation. This tiny island possesses quiet bays with several long stretches of beautiful white sandy beaches excellent for swimming, snorkeling and beach combing. There are very few cars on the island; the majority of the transportation is via golf cart, bicycle, boat or foot. Horses run freely along with donkeys, cows and chickens – it is customary to give them the right-of-way should you meet them on the road. It rarely rains in Salt Cay, therefore water is precious. Cows and donkeys get a hankering for paper and cardboard when the grass dries up so be warned if you leave your favorite book laying around. Water is caught on roof-tops and saved in cisterns as well as manufactured from sea water by reverse osmosis.

Salt Cay has something for everyone. Star gazers, bird watchers, beach combers and hammock nappers love this place! Between January and April Salt Cay becomes a Mecca for whale watchers who travel here to observe the migrating humpback whales. Often they pass close to the island and can be spotted from balconies and decks. The locals with boats for hire make it possible to tour out to be closer to these giant beasts. Bird watchers love Salt Cay. Salt Cay is a rest stop for migrating birds with varieties ranging from pink flamingos to blue herons. Salt Cay’s quiet environment makes it the perfect spot for bird watching. History buffs can busy themselves chatting to Salt Cay’s friendly locals about the island’s history and exploring old buildings and sites dating back to the 1600’s. Salt Cay has been recommended as a UNESCO world heritage site.  Visit SaltCayPreservation.org

Take a day tour to Grand Turk to visit the Turks and Caicos Islands National Museum. 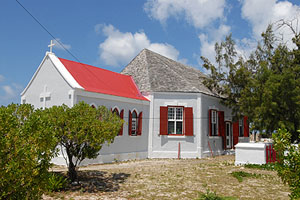 There are approximately 80 people that reside on the island of Salt Cay. On Sunday, you will see tidy dress and colorful hats emerge from all doors headed down the streets to church. The local population would love to welcome your visit in any of their several churches: St John’s Anglican, Mt Zion Baptist, Church of God of Prophecy and Salt Cay Methodist. 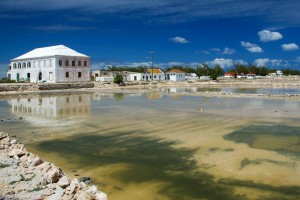 sit to Salt Cay is essential if you want to understand the history of the Salt Islands. Little has changed in Salt Cay since 1900, when the Salt Industry flourished. The solar salt industry was revived again in the 1940’s when other global sources were cut off by the war. Exports remained steady until 1964 when the industry tapered back down to a quiet stop. Buildings, salinas and artifacts essential to solar salt production still remain.

Salt Cay was first visited by Bermudians in 1645. Ever since then, Salt Cay has been dominated by Bermudian salt traders, specifically the Herriot family whose White House, pictured above, has been a Salt Cay landmark since the early 1800’s.

It sits so high on the horizon that it is one of the first things you see from several miles out at sea. The salt house is an example of classic Bermudan architecture with the living quarters on the upper level and the salt storage underneath. The roof is made of limestone and concrete. Its frame, wall and floors are constructed from the ship’s timbers that brought the family to Salt Cay.

The White House is still owned by the same family who have preserved the furnishings and interior decor from the days of their great grand parents. Tours of the White House are sometimes granted by the owners. For more on this intriguing history read the Turks Islands Landfall by H.E. Sadler and “Worth Their Salt” by Bob Payne, Islands Magazine.

How to get to Salt Cay

Getting to Salt Cay is typically via the local airlines which your accommodation management will typically arrange for you, departing from the international airport in Providenciales or Grand Turk, either scheduled or chartered. There is also a Ferry that runs between Grand Turk and Salt Cay on a biweekly schedule. Leaving Dean's Dock at 8am on tues/weds/fri. Returning from Grand Turk South Dock leaving 2:30 tues & fri with the weds leaving at 12:30. Its about $15 round trip. Call Capt Dickenson on 231-6663 for more information.

What to pack for Salt Cay

Dress code for Salt Cay is barefoot casual - you will feel at ease replacing collared shirts and pantyhose with sunhats, sunglasses and plenty of sunscreen. Remember to keep your swim suit covered up whilst not on the boat or in the water, not only because of the strong sun but in respect for the reserved island residents.

For an island of little resources from water shortages and spotty telephony you will find dining and drinking on Salt Cay an untouched wonder. Travel through the tastes of Salt Cay from local island dishes such as 'peas & rice', 'steam fish' and 'crack conch', to sophisticated presentations of 'almond encrusted snapper' and 'bananas foster'.

When the water runs out, you will still find plenty to drink from Heineken, the favorite island beer, to rum punch and the nefarious 'wolf' and 'monkey', backed by official island legend ....just ask.